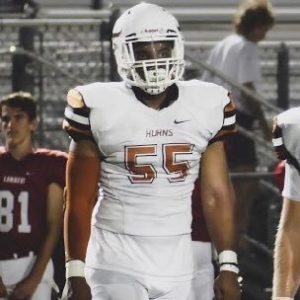 Lanier defensive end keeps his back flat while engaged, shows good leg drive and uses his hands well to get off blocks. I really like how powerful he looks, and he really generates good drive at the point of attack. He’s not very quick getting around blocks, but fundamentally speaking, looks pretty sharp. Gets pretty good leverage, does a nice job of scraping off his blocking and gets to the QB. There is a lot of hurries on his film, and he’s pretty close to making a negative play. Considering his size at 6’4″ and 250 lbs he looks like a SDE at the next level. I like how physical he plays the game, a little more work getting out his stance and improving his lateral quickness then I think his game will jump to another level. Really like his athletic upside at this point.