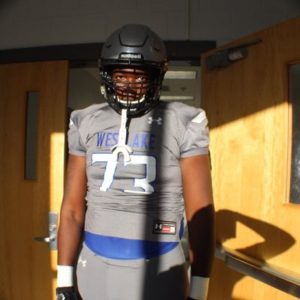 Weight lifting numbers are a year old, so we will omit, but I think it says a lot about how much the 2021 recruit has improved athletically over the last year. He was a raw player as a sophomore but looking a lot more refined his junior year, especially in the passing game where his length and quickness stands out. Leftwich has a nasty streak to him and really gets after the defender until the play is dead. Very good length, it’s pretty easy for him to get leverage on the opponent and he doesn’t even need to fully extend. Leftwhich needs to continue to work on those hips and just get quicker coming out his stance, but as a whole, the 2021 recruit is one of the best athletes at OT in the state. Just would like to see him be stronger at the point of attack sometime and not just be satisfied sealing off the defender but driving them into the turf. Definitely a P5 level recruit here.