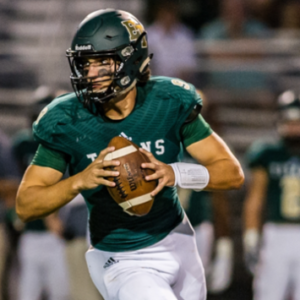 Smith does a good job of carrying out his fakes and plays the game with a cool resolve out there on the field. He has always been a high IQ player, and that was obvious when he was thrust into duty as a freshman in the state playoffs. When Smith does run, he goes in like his hair is on fire and gets an additional yards. Looks like he has improved his passing from a distance and we saw him throw a couple ropes while also perfectly leading the receiver. Smith is what we call a gamer. He does what his team needs of him, and will take over on both sides of the field in order to win. The 2019 recruit led his team to the state title game throwing key passes along the way, and also playing safety in the playoffs. He won MVP in the state title game where his intangibles and leadership was fully present. Smith has an accurate arm and does a great job of keeping his cool while under pressure. His ability to slip out of tackles appears to have improved, and we are seeing better lateral quickness allowing him to get out of the pocket. Smith’s film indicates some potential at free safety, but we still like his ability to play QB at the next level. Improving his speed, and continuing to make more throws outside of the pocket should be an area of focus this offseason, as Smith will have to market himself as a dual threat QB.