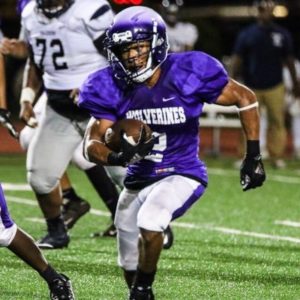 I’m willing to play any position for my team to take a W. I give my all every play and leave it on the field.

Oldfield has been burning up the track this offseason, and the little speed back from Miller Grove last fall did much the same on the gridiron. He has a smaller frame no doubt, but shows a really natural ability at making defenders miss. He displays outstanding vision, keeps his head on a swivel, and does a nice job of looking lanes to make cutbacks. Oldfield would prosper in a spread offense where he gets a bunch of zone reads off tackle. Improving his lower body strength so that he can maintain balance and show colleges that he can take the hits at the next level will really boost his stock. No doubt Oldfield can run, his ability to change direction in a fluttering like pattern allows him to weave through blocks. It’s an interesting style, and if he has continued to improve his speed like his track times suggest he could really breakout this fall with over 1000 all-purpose yards. Last part of Oldfield’s game that is worth mentioning is his toughness. He takes the ball into the teeth of the defense, and dos a really good job of picking his way while also fighting off blocks. He will be used as a big play back at the next level, but his toughness shouldn’t be understated. Would like to see more plays of him going out as a receiver, that should be a major focus this offseason, turning himself into more of a receiver.