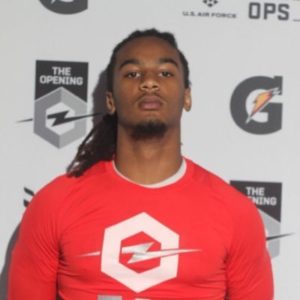 Hunter is an explosive defensive end prospect that covers some serious ground. Legit sideline to sideline speed. He’s about 6’3″, but this type of quickness to the football is impressive. You can expect P5 schools to take notice and him to be loaded up with offers. Hunter is a big hitter too, a lot of it is his impressive momentum that he builds up before contact, but he also does a nice job going cheek to cheek on his attempts. Also plays some TE, and again, you see his impressive top end speed really shine through here. Hunter disruptive play style and quickness out his stance is some of the best in the entire class and expect him to load up on offers as one of the best hybrid DE/OLB’s in this class. Very tough player, lines up at DT and DE for his team. Just way to quick for HS players to block efficiently.