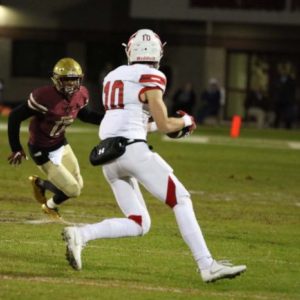 I am very coachable, have a strong work ethic, run great routes and attack the ball in the air. Member of the GA True 19 team.

Leonard had a limited role at Milton last season, which was mostly the result of an injury. He has good height, and the frame to end up over 220 pounds. The opportunities he was given he made some really difficult catches, and it appears that playing behind two senior wide receivers really mitigated his numbers. Next year you should see a sizeable jump in production. He shows really good concentration, and can make catches down the middle of the field with contact. He could grow into a TE, but not matter what I think the senior can play at a pretty high level. He just scratching the surface with his blocking and long arms give him a distinct advantage. You could see a jump in his projection based off what we see this offseason and early production senior season. Must invite to college camps.