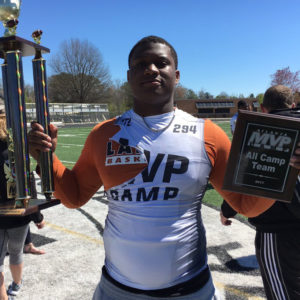 I can outwork anyone you put in front of me and I love the grind!

Martin is a great all-around athlete with elite quickness coming out of his stance. He is extremely tenacious in the trenches, and physically outworks his opponent as soon as the ball is snapped. The 2018 recruit was an All-State performer as a wrestler, and you can see that translate really well playing in the trenches. Martin looks like he could easily pack on another 20-30 pounds and become a dominating 4-3 defensive tackle at the next level. He played last season at Lanier HS but will be suiting up for Georgia Force HS.