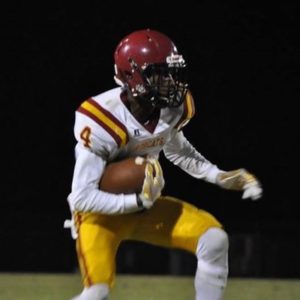 Lester has pretty good speed, but where he is truly underrated is as a route runner. This guys release is something else, he shows really quick feet, nice stutter, deceptive head fakes, and can change direction on a dime. He sells it well, and can fake a defender out of his shoes. He shows outstanding ball skills too, making a few catches where he leaps up full extension and makes the catch. It’s an all too common occurent on his highlight reel and to be honest you do not see a Class A Public receiver look this polished. His speed is solid, I would not say say he is a burner at the next level but added muscle should only help. I really like his frame to add weight too. Lester could easily be around 190 and runs a legit 4.5 and if you couple that with his skill set than you have a very talented player. Lester also plays cornerback, where his same ball skills are a major advantage. Good tackler too actually, wraps up and is very aggressive out in the flat. In two playoff he came up clutch, and had his two best games of the season with 289 rec. yards in round 1 & 201 rec yards in round 2. He finished the year with 1036 yards and 60 catches.