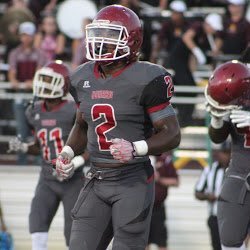 What makes me stand out is that i love the game. I make plays left and right. I use My speed to track down opponents very well. Also with my height size and strength i feel I can play at the next level and compete with the best. I have named been first team all region defense for the second year in a row. I have had the honor to be named best linebacker at my school. I was Invited to and played in the Georgia Elite Classic Allstar game.

Shelton sees the field pretty well and makes a lot of tackles out on the perimeter where he sees the play pretty early. He does a good job of taking on blocks, but needs to use his hands more to get off of them. The 2019 recruit has been a 2x All-Region performer. He has a really good frame and should near 240 pounds at the next level. I would like to see him do a better job of squaring up on the ball carrier and really putting a hat on their number. Too many times we see arm tackles where he wrangles them down and extra yards are given up. From an athletic upside Shelton can play at the FBS level. He even got snaps at RB senior year, but no film to go off right now.