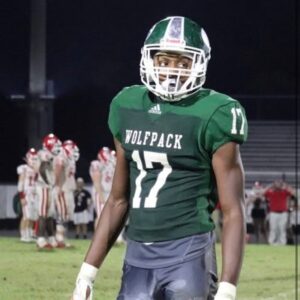 Driskell attended our combine his freshman year where he ran a laser 4.8 40 and a 32-inch vert. That alone caught our attention, he was by far the best freshman athlete at the combine. His 85″ standing reach as a freshman demonstrated an elite frame to work with. Driskell has continued to grow and is now 2 inches taller and over 200. You cannot teach the raw athleticism and potential that the 2022 recruit shows. He is a FS his sophomore year, but honestly should be playing more off the edge. Junior year that’s exactly where he is at. Driskell is even playing some WR/TE too. He doesn’t use his hands the best to get off blocks right now, but laterally he changes directions quickly and is able to bounce back and forth around the blocker to make the tackle. To me, the 2022 recruit is a P5 athlete, but still seems to be figuring out where he fits best on a team or where he can make the biggest impact. Personally, it’s at OLB rushing the QB or attacking plays out in the flat, but definitely interested in his potential as a receiver too. Working on getting lower with his tackle attempts would be nice to see. Driskell has a ton of upside, and just beginning to fill out his frame, but definitely one of the top uncommitted seniors in the state still.