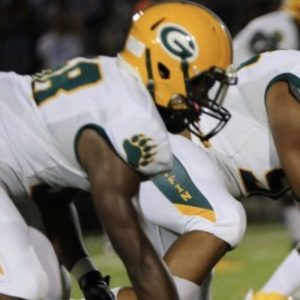 Wright comes of with intensity out his stance, he is an explosive defender who really hustles from the backside. He is about 6’1″, not a prototypical size. Very tough in the trenches though, gets off blocks and tracks football well – doesn’t get trick to easily on the play. In fact, Wright is more times than not on the football. Whether it is a screen pass or playing the read option – Wright makes plays. He is a good tackler too. Explodes through the ball carrier and makes his attempts fairly low. Interested in seeing him get some more reps out in space, if not at linebacker, at least further out on the edge. Love his intensity and energy that he plays with – think his higher IQ will make the transition to linebacker much easier.