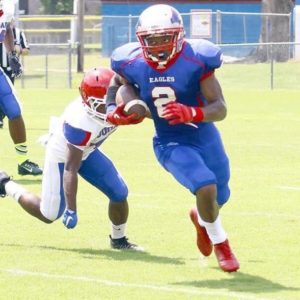 Harvey gets downhill and makes a lot of tackles around the line of scrimmage. His pursuit angles are okay, but the speed of the college game will certainly take an adjustment period for the senior. His squad has been a surprise team, and it looks like he is a major reason why. Not only is he playing safety, but also running back. He is a well put together player, has okay running vision, but looks to get out to the sideline more than anything. He is more of a defensive prospect but for a defensive back we see almost no pass break ups. Harvey is a solid prospect, he could play nickle at the next level, but where he is really lacking is academically. His GPA is on the fence to be NCAA qualified, but if he can get his score up I wouldn’t be surprised to some local colleges jump in.