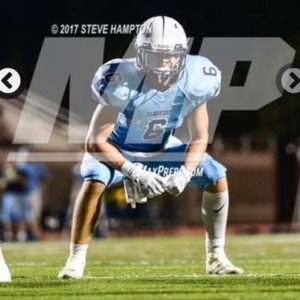 Size at safety and coverage

A few seasons back, we had pretty big expectations for Graham, but the last offseason he broke his knee cap on black ice, and his lack of activity sort of got him off our radar. Graham is a solid tackler in space, he has the versatility to play both SS or OLB at the next level. I really like how quickly he can react to the play, and he shows good lateral quickness for his size. Needs to improve tackling a little more, seems make a lot of plays with his arms instead of lining up with a more clear cut pursuit angle. I would really only consider Graham to be an OLB at this point. He’s looked good in his junior film, coverage skills are further along than other LB prospects too. The knee injury obviously hindered his development at least at a physical level, and has only really added 5 lbs in the last two seasons. Was impressed to see that he even got reps at receiver. Graham would probably have a much different recruitment if he didn’t have that year off, but he really showed some flashes again as an impressive D1 OLB. Increase his production SR year, and I think FBS schools will offer.