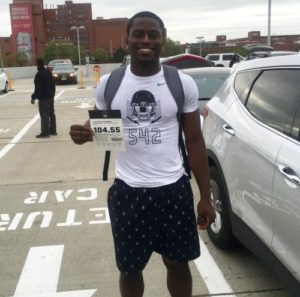 The powerful hybrid receiver/tight end is tough to defend at the line of scrimmage. His shear physicality makes him really tough to handle in press coverage, and he shows outstanding running visions once the ball is in his hands. Okonkwo looks like he can pour on weight and end up being around 230 pounds. Also, a lot of teams think he is a TE, but he is certainly making a lot of long touchdown grabs not typically seen even at this level. The 2018 receiver has been doing great this offseason at camps and recently scored a 104.55 SPARQ score. He only has a few P5 offers but think that could change a lot sooner than later.