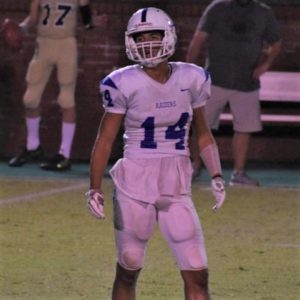 Carr has produced every step of the way in HS, and has been extremely impressive his senior year improving his receiving total by 400 yards in the last year. He is a tough guy to knock off his routes, very strong and can take press coverage and bump the DB off. He has good speed, and could be described a tweener for some at both WR and TE. He has really good hands though, and just makes plays for his team. I really like how he comes back to the football, see so many receivers play the ball on their heels, and Carr attacks the pass. Very good route runner too, would be a tough matchup in the slot. Probably can get to around 220 at the next level. Finished the regular season with 72 catches, 1150 yards, 6 touchdowns and 115 yards per game, making him one of the toughest matchups in the state for his senior class. Carr is a deceptive runner, and over the last year has really added another gear to his game. He is a workhorse of a player, and shows the versatility to line up at any receiver spot and get good separation on his route.