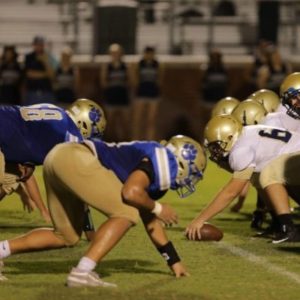 COACH NOTES: Brendan transferred to Bradwell at the beginning of the 2017 season, and he became an immediate impact player for us. Despite his background as a linebacker, Brendan took to defensive line quickly, learning technique and making plays early on. An injured shoulder kept him out of 4 games for us, but he still earned a 2nd Team All-Region nod and a spot on the GA-FLA All-Star roster. Brendan moves very well for a big man (4.89 40), and he plays fast and smart. His strength was sub-par when he arrived, but he has grown leaps and bounds since entering our training program. Brendan has active, violent hands, and he understands how to secure gaps and pursue the football with great effort.

The powerful SDE for Bradwell shows a series of moves to allow him to get off blocks. He does a quality job using his length, which appears to have long arms, to get good leverage on the blocker so he can set the edge. Brittingham is a run stopper no doubt. Adding another 15-20 pounds to his frame over the next year is expected. Against some solid competition Brittingham made plays. We would like to see him get stronger with his hands, and to get more of an initial push at the point of attack. He does a good job of pursuing after the ball carrier, but would like to see him play with even more urgency. Brittingham is a quality recruit, he has the potential to grow into a DT, so that versatility should attract a solid group of schools. Since he is new to the defensive line position, we are hoping to see him take a bigger jump this fall than others in his class.