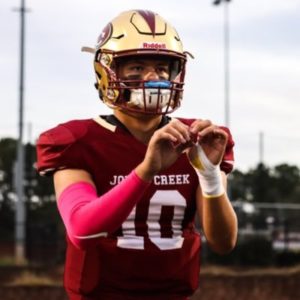 The first QB at Denmark HS looks to be Ben Whitlock. Watching his offseason film, he shows a pretty solid arm, and can make pretty quick decision when reading a defense. Does a pretty good job of looking off the defense. Whitlock needs to get some serious varsity reps right now, but he will have some solid talent to work with this fall, so fully expecting him to put up #’s. Junior year update, and Whitlock has definitely put up #’s, and was one of the top passers in 4-A with 2718 passing yards and 26 touchdowns. All the traits highlighted in spring film, have become continuous themes into his junior year. The 2020 recruit transferred over to Johns Creek his senior year. Whitlock does a nice job making pump fakes, he sets his feet well when making a throw. Nice light footwork in the pocket, effortless release and a gets the ball out 50 yards down field with relative ease. Whitlock really continues to develop as a QB, and moving over to Johns Creek has helped him a good bit from our perspective. He spread the football around to his teammates and surpassed 3k passing yards season, giving him about 6k in the last two years. His 36 touchdowns and 65% makes him one of the most efficient QB’s in the entire state of Georgia.