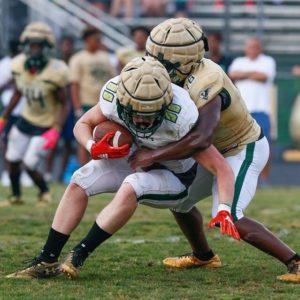 I will always work hard and never let my head down. I will encourage other people and always keep people motivated.

DeBerry has come through the Grayson feeder program as a tough run blocker who can slip out into the flat and get yards down field. He’s not a burner, but the 2020 tight end does get up field quickly showing a lot of urgency right after the catch. DeBarry has added solid muscle over the last year which certainly helped with his blocking, but it was hard to get a ton of reps at Grayson last fall with so much talent on the field, but he certainly unloaded some big blocks. DeBerry played in several All-Star games that we have watched, he is a tough player who does a nice job of slipping out into the flat. Overall, his blocking is near the tops among H-backs in the state of GA, and can see him becoming a larger part of the passing attack in 2019 – his new HC did a nice job of getting the pigskin to his TE’s at his previous stop.