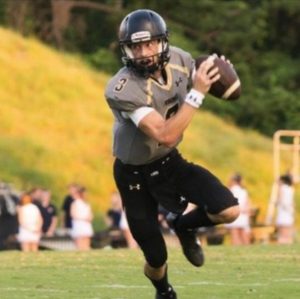 Be a leader for the team and having a positive attitude to bring the best athletes out of my teammates.

Parker is the leading passer in the state of Georgia this year and through 12 games he had 4541 yards, completing 217 out 344 attempts (63.1%) and 49 TDs. The senior has grown like crazy over the last two years when he first signed up. He’s now 3-4 inches taller and around 50 pounds heavier – easy to say he is a later bloomer. another marked improvement is his running which is a major part to his game, and he does an excellent job of keeping the play alive. He is lightening quick, and in 2017 he rushed for 590 yards on 70 carries, which is a 8.4 average. He is on fire right now, and has throw for over 400 yards in each of the last 4 games. The most important going against top 10 ranked Morgan County in the first round of the playoffs where he threw for 463 yards and 6 TDs while also rushing for 72 yards. His senior year has been remarkable, and he is easily the front-runner for All-State quarterback in 3-A. Biggest take away from Parker is he makes the players around him better.