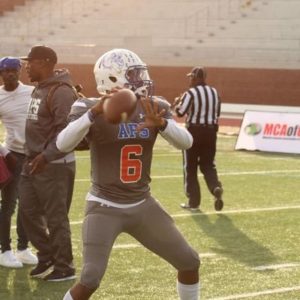 Douglass is one of the better teams in Class AA the last few years, and last fall Williams led his squad to another state playoff appearance. He has a big frame, and looks like in college he could end up being over 230, so there is a wide variety of positions he could end up at. Throwing the ball Williams is very raw still and the trajectory of his passes are throw typically with too much air. As a runner he doesn’t display very good open field vision, and seems to lose his footing very easily. Williams is a good student, but his lack of arm strength will make it tough for colleges to recruit him at QB. Next fall Williams is suiting up for Booker T. Washington, as they have a pretty talented senior bunch going in.