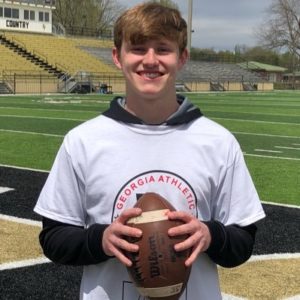 Sowder is a solid dual threat who needs to expand on his game over the next year. The 2020 QB put up respectful numbers in his first year starting and has right at 1300 total yards. Looking at his film, and I would tend to believe that he over scrambles. He’s got good wheels, and can burn a defender who doesn’t respect his speed and take the right angle. Sowder is a legit running threat, he shows some solid potential in the open field, eluding defenders and making solid reads. Shuttle time is very good too, shows he has better quickness than most QB’s in the state. He zones in on the receiver, do not see him go through many progressions right now. At this point Sowder is more of an athlete, arm strength needs to improve from junior year, but shows some potential as a dual threat at the next level too. I could see him taking a jump as a runner in 2019, and be a lot closer to 1000 yards rushing. I would be curious to work him as a slot receiver or even RB at the next level if QB does not stick.