Woodstock was one of several high potent passing attacks in the Peach State in 2016. Coach Brent Budde and his squad passed for 3,233 yards and 40 touchdowns on their way to a (7-5/3-2) record. They exited the second round of the playoffs with a loss to eventual GHSA-AAAAAAA State Champion Grayson. There is much to look forward to this season as the Wolverines return nine starters on offense which includes two-sport star Noah Frith.

As a junior the 6-foot-4, 180-pound receiver caught 70 passes for 826 yards and 15 scores. Frith was also the leading rebounder and third leading scores for the Wolverine basketball squad this past season. So the question at hand is why does this physical phenom lack scholarship offers at this time?

“Over the last seven years we have had only a few FBS level prospects,” Budde said. “But Frith, he is different, and I find it hard to believe that no one has made a firm offer yet. His potential to be a big-time player at the next level is great.” 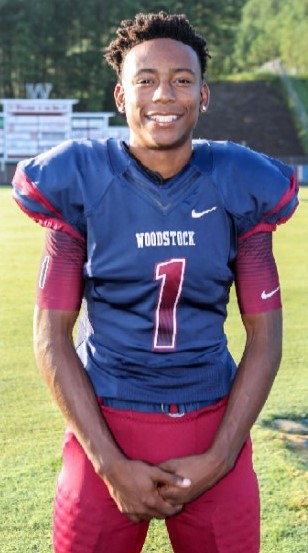 Every college in America is looking for that tall lengthy vertical threat that can go up and get it. His size and ability to attack the ball at its highest point makes Frith a total mismatch for smaller defensive backs. This guy attacks the ball with a rebounder’s mentality.

Possessing the qualities mentioned above still translates as a real headscratcher to the absence of offers. Is it grades? No, Frith claims a solid 3.0 GPA, and is set to take the SAT for the first time in June. Is it a lack of speed? No, he ran a solid 4.52 at Auburn’s camp last summer.

“He may be behind in the process because his sophomore season was cut short with a minor knee injury,” Budde said. “But still, coaches have to see his size, and athleticism, and think he has a chance to be a difference-maker. We play in a tough region at the highest level in the state of Georgia, and my 2018 class is very talented.”

Maybe the fact that Frith has not made a single unofficial visit since attending a Duke Football game last fall has created this void in recruiting. He has also been absent on the spring camp circuit.

“Yeah, I haven’t been anywhere this spring, AAU basketball really took up a lot of my free time to make visits,” Frith said. “But recently I’ve given up playing AAU as I have come to the realization that football is my future. I use to think basketball was number one, but that is simply not the case anymore.”

Right now there are two schools showing serious interest. Coastal Carolina and Eastern Kentucky have kept in constant contact despite never laying eyes on Frith. At this point he contends to be wide open in the recruiting process.

“I’d like to go to a camp at Duke this summer,” Frith said. “It would also be nice to get an invite to the Rivals.com Three Stripe Camp in Atlanta on April, 22. I’m wide open to any mid-major or Power Five conference school that is interested in me.”

Despite the lack of serious interest Frith remains positive about the process, and is really focusing on the upcoming season.

“We have all but two offensive starters back next year, but we have to replace a lot on defense,” Frith said. If we learn to respect each other and stop arguing amongst ourselves we can accomplish so much more than seven wins. We have to put team first before our own individual goals.”

Regardless of what the reasoning is behind the lack of recruiting, college coaches will surely be slack-jawed at the site of this statuesque high-flyer once they set eyes upon Frith. Look for his stock to soar in the next few months.