Senior Ahmad Mosley is a slippery running back from Tiftarea Academy in Chula Georgia and is our most recent Top Play winner.

For the winning play, the class of ’17 recruit split two defenders, got up field in a hurry, and then broke one tackle after another down the sideline for an amazing 50-yard touchdown run. It was a splendid play that not only showcased his athleticism, but sheer will to fight and get every possible yard.

Being a senior on his Tiftarea Academy squad, Mosley has assumed a leadership role. We asked him about how the season has progressed both for himself individually, and his team. 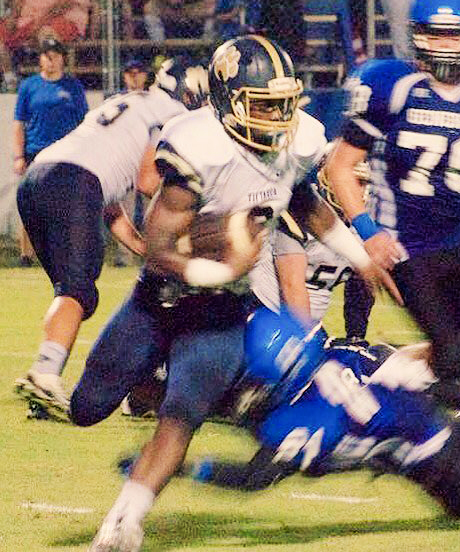 “The season so far has been great. The team this year is focused on one thing and that is to make a run for state.” Mosley continued, “We (seniors) have been pushing all the young guys who have been stepping up all year. We’re really “grinding”, and we’re 3-2, considering a scrimmage game loss.”

On film, Mosley is faster than a jackrabbit, and hops out of tackle attempts like it is no sweat. That skill set in tandem with his physical running style has allowed him to put up ridiculous rushing numbers. “My stats this season are 56 carries for 634 yards and I only see them getting better for the rest of the season,” Mosley said.

In case you did not do the math, the senior back is rushing for 11.32 yards per carry. That is right, Mosley is averaging a first down every time he touches the football – now that is an offensive weapon!

No matter what the level of competition or scheme you play in, colleges will find out about you, especially if you put up numbers like Mosley. So it was no surprise to hear that Mercer, Kennesaw State, Presbyterian and UAB have all been in contact with the electrifying senior back.

Mosley has a low center of gravity when toting the rock, and his lightening fast agility allows him to slash open defenses for big momentum swinging plays. At 5’9″, and 180-pounds, Mosley likens his game to a former star running back at Nebraska, who also shares similar measurements.

“I model my game after former Nebraska running back Ameer Abdullah (5’9″ 190 lbs), who shows power running through the hole and uses his vision to find the hole.”

Mosley eat, sleeps and drinks football. That mentality to always improve has allowed him to progress in leaps and bounds through the years. “I think I need to improve my vision and gain a little more weight and just keep learning and getting better everyday.”

He believes he can make an impact for a college program in a lot of ways but his ability to go north-south and fight for extra yardage is his biggest strength. Mosley has great pad level and naturally understands how to elude a tackle.

His thirst to improve his game is insatiable and that mindset to always continue to improve could never be more true than when he said, “I can never be satisfied, because I’m not where I wanna be.”

Every year colleges get all types of recruits with varying personalities. What a college receives in Mosley is a hardworker that is hungry to get better.