DULUTH, Ga. — Will Huzzie fully understands why he’s currently flying under the college recruiting radar, despite all of the measurables seemingly in his favor. The 6-foot-3, 185-pound Duluth High senior has the height and the size of an elite prospect. He’s got the high school success track record as well.

In an age where it’s becoming more prevalent for high school stars to leave struggling teams and find big named schools to play for in an attempt to bolster their exposure, Huzzie has stayed — and at times toiled — at Duluth long enough to become the school’s all-time leading receiver.

The Wildcats haven’t been successful during his four years, though. With a combined 5-27 mark since Huzzie’s been there — which includes the team’s current 1-2 record — Huzzie says it’s no secret why he and other talented teammates aren’t getting the offers he feels they deserve.

“I know (the lack of offers) is probably because of my school,” Huzzie said. “We’re not really known for winning. We have some good athletes that I think can definitely play at college. But our exposure is probably lacking because of the way our teams haven’t won a whole lot of games.”

And whereas some players would pout and run from such a designation, Huzzie says he’s allowed it to strengthen his resolve to prove that elite high school players can and do reside on non-winning teams.

“At the end of the day, you want a winner,” Huzzie said. “So I can’t really blame the college coaches for why they don’t give guys like us a look. But we still have winners on our team even if we don’t have winning records. When I was growing up, my dad taught me that the only reason you should play sports is to win. That’s the only motto I’ve had since I was three years old.”

It’s for that reason Huzzie believes that college coaches passing up on him, or any other talented player because of team records, may want to take a second look.

“Some college coaches should look past that and just give us a look,” he said. “They would like what they see.” 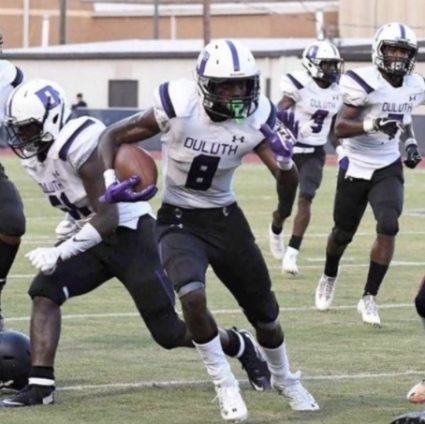 What they’d see from Huzzie is a big receiver with solid route running ability, big, strong hands, good speed and an uncanny knack for knowing where he is on the field at all times when a ball is coming his way. The latter is a quality he is especially proud of.

All those ingredients combined to produce Huzzie’s stellar 2016 campaign, one that netted him first-team all-Gwinnett County honors, and etched his name into the school’s record books.

He snagged 44 balls for 640 yards and six touchdowns for the 2-8 Wildcats last year. It was the second-to-last game of the season when Huzzie said he broke the school’s all-time receiving yards mark — a feat he didn’t realize he had accomplished until right before the first game of the 2017 season. It’s quite the milestone for a school that’s been playing football consistently since 1961.

“I really didn’t notice it,” Huzzie said. “Our receiver coach brought it up. But he told me that if I keep my head down and keep working, I can break more.”


And he’s off to a great start.

Huzzie opened the year with nine catches for 190 yards and a score in a loss to Alcovy. Just this past week against Meadwocreek, he snagged 10 balls for 145 yards and a touchdown. In Duluth’s lone win of the season so far, Huzzie only caught two balls for 84 yards. But both snags were for touchdowns in the Wildcat’s 44-0 win over Berkmar. He alone is the recipient of 55 percent of Duluth’s passing offense this season.

But being on another record breaking pace isn’t Huzzie’s chief motivation.

“I mean, the records and all that are good,” he said. “I’m glad to be breaking the records. But that’s not my main goal for my senior year. My main goal is to have my team winning and for us to get into the playoffs.”

Some of it is for his own personal benefit. Despite his impressive resume, Huzzie has no college offers to date, although he has garnered strong and steady interest from Nevada, Middle Tennessee State, Kansas State and Ohio University. He says Kansas State is communicating with him every week now.

But a large brunt of the source of his ambition comes from his realization that his personal success means nothing if it doesn’t help those whom he goes to battle with each Friday night.

Huzzie will take this coming weekend to make a visit to Middle Tennessee State. Later he’ll check out Kentucky. These are the kinds of opportunities Huzzie says he’s hustled for.

“It’s a blessing because at one point, I didn’t think schools were really looking at me,” he said. “I’m blessed to be in the situation to where I can go to these places.”

Of the schools that are showing him the most love, Huzzie said he wouldn’t mind if Nevada would be the first to pull the trigger on an offer.

“I like their offense,” he said. “It’s very similar to the offense at my school now.”

But he won’t be too choosey. In fact, Huzzie says he has a message for any school that would decide to take a chance on him — a message he hopes college recruiters will take to heart when considering him being a good fit for a program.

“I play with the biggest chip on the shoulder of anybody,” he said. “I feel like nobody can outwork me. I feel like all of this hard work will pay off. I’ve been training my whole life for the opportunity to play at the next level. Some play this sport to get the money. But I want these schools to know that I play this sport because I just love the game.”