The results are in from our 2020 Gwinnett Combine, and we are here to recap the top performers at each drill. Some players have requested for their information to be held private regardless of how they ranked, so we have compiled a partial top performer list of each drill from last Sunday’s event. Plus, at the bottom we have an Upperclassmen and Underclassmen MVP’s to go along with Tracking Football’s Top 10 Performers.

This was by far our best turnout with about 85 participants stretching from every corner of the state. We had athletes from the class of 2021-2023 and also one incoming freshman too. This combine showcases the immense athleticism of this state, but also the reality of a laser timer. We strive for our times to be the most accurate in the industry, and play no favorites on who participates, so every athlete participating knows they got true and honest scores.

So with out any further adieu, here are our 2020 combine’s top performers.

Top Dog – Anderson at 6’7″ breaks the combine record for tallest athlete, and still has plenty room to grow at 255 lbs. The long Rockdale OT has a good motor blocking. He has a ton of upside, and just beginning to scratch the surface of his potential.

Top Dog – Ranew was the heaviest linemen at the combine with Thomas Barton out of Lowndes coming in a close 2nd. The Mountain View rising senior has been a multi-year starter.

Top Dog – Ranew also ends up with longest reach of the OL, which really says a lot about his upside as a blocker considering he measured 2-3 inches shorter than the linemen just below him on the list. He projects very well at OG.

Top Dog – Edwards-Tidwell ties the combine record set by Justin Myers last year from Washington-Wilkes. With the combine being indoors, there was no wind to aid this time, just pure speed from the North Murray product. Navy just offered last week, and expect the rising senior to burn up stopwatches at camps this summer. The multi-year starter is prime for a huge senior year.

Top Dog – The Collins Hill rising junior is still just filling out his frame at 5’11” and 185 lbs., but cannot deny his shear explosiveness. Dorsey’s 38″ vertical jump breaks the combine record by two inches held last year by Army signee AJ Williams. Dorsey played a little varsity as a sophomore, primarily on special teams, so look for the defender to be an impact starter this upcoming season.

Top Dog – Another combine record is smashed with junior LaTrell Jewsome breaking the 10′ barrier on the broad jump. The 2021 cornerback had double digit pass breakups last season and showed excellent speed/quickness on film even playing some running back where he broke off a few long runs.

Top Dog – Georgia Force’s Kyle Moseley was definitely the most agile player at the combine with a sub 7 second L-Drill to go along with a top 3 finish at the shuttle. The 2021 QB threw for 1526 yards and 17 touchdowns last season. We expect Moseley to be rushing more his senior year with the graduation of their top rusher. Also, Andre Craig becomes the first freshman in combine history to break the sub-7 second barrier – definitely a 2023 athlete to keep an eye on.

Top Dog – Brock’s 4.11 is unbelievably quick, and would rank him near the tops of backs at the NFL combine. The 2021 Commerce slot back gets up field in a hurry, and as his numbers suggest, he is a fluid runner with good cutback vision. Brock figures to be the top slot back at Commerce his senior year.

Top Dog – Lincoln Parker pushed for the combine record at the 185 lbs. bench but came up a few reps short of Drake Hatchers 31 from last year. Parker is an ironman over at Marist playing LB and FB. Over the last year he has grown an additional inch and is now over 6′. He was in the top percentile at almost every event at the combine. 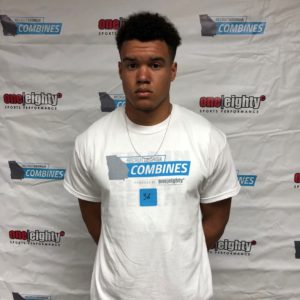 The 2023 Central-Carrollton athlete checked all the boxes you look for in an FBS caliber athlete. Measuring in at 6’3″ and 187 lbs., the long-athletic freshman tied for the 2nd best time with a 4.69 laser 40. His 34.5″ vertical and 9’3.5″ broad continue the trend of explosive powerful movements, while he also repped 185 lbs. 15 times. Edge’s numbers are extremely impressive, especially for a freshman. In fact, 180 Sports Performance called soon after the combine to let us know his scores. As a freshman, Edge played DB, WR and also returned kicks. Over the next year, we expect him to continue to fill out his frame, and be over 200 lbs. this time a year from now. The aptly named Edge should be playing closer to the LOS on defense while continuing to refine his skill set as a receiver. Runner-up goes to Rich Dorsey, a sophomore out of Collins Hill who broke the combine record with a 38″ vertical jump. 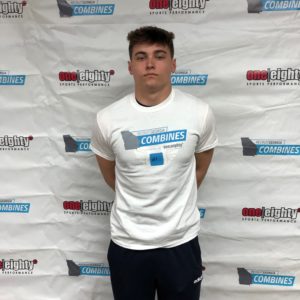 After rushing around 1k yards the last few years, Joseph Stellmach was definitely on our radar when we saw his name on the sign-up list for this combine. He did not disappoint, and in fact, he led all participants placing as a top performer in 4 of the drills (40, vertical, broad and shuttle). Stellmach also repped 185 lbs. 22 times. He measured in at 6’0.75″ and weighed 187 lbs. The rising senior has been one of the most productive backs the last few years in Cobb County and been an integral role to Pope’s offensive attack. He has the ability to gash a defense for a big play and does so routinely on film. Stellmach 4.69 laser 40 time is one of the fastest in combine history, and his film matches the time with one big play after another. There is little doubt that option teams should be all over the rising senior recruit. Runner-up goes to Cade Petty from North Murray, who also excelled at most events at the combine including an explosive 9’7″ broad jump, which was the 2nd best at the event. We were pleasantly surprised that he measured out at 6’1″ to go along being a top performer at the 40 (4.74) and vertical (34″).